It's just not Fat Tuesday without a King Cake. This traditional New Orleans Mardi Gras treat is easy to make and just plain delicious. 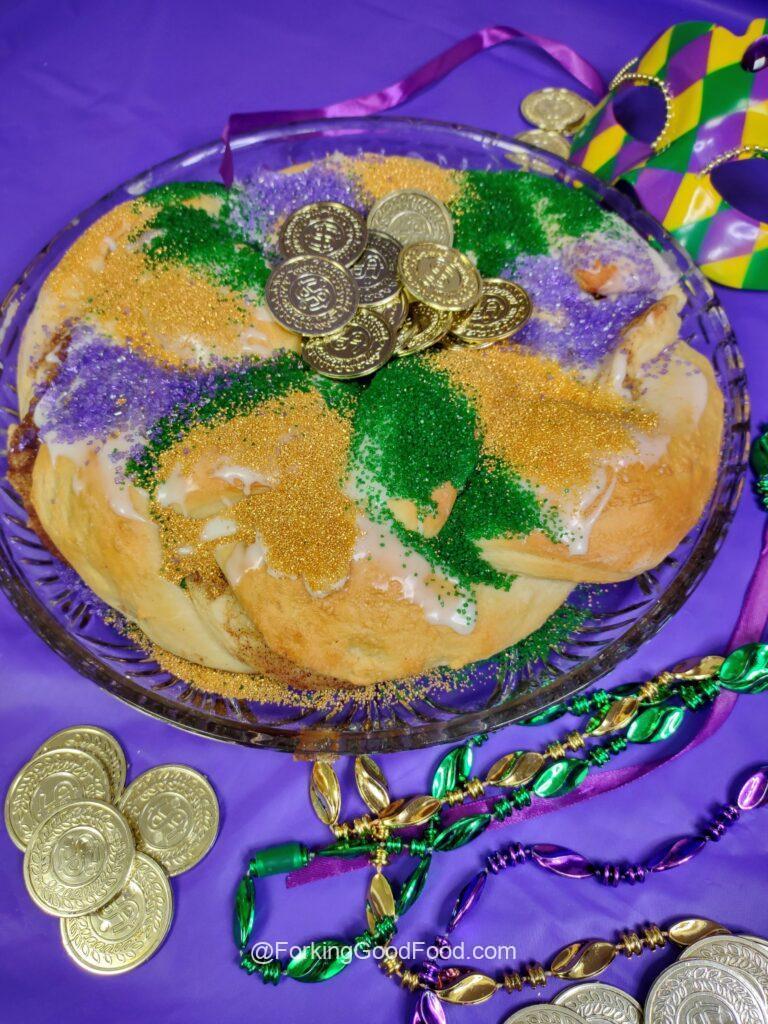 Or in other words - Let the Good Times Roll - Yes, Love - It's Fat Tuesday! I love new Orleans - I just  love it.  Some of my best memories are of Bourbon Street, music, friends, and King Cake.  To call it a cake is really a misnomer - it's a cinnamon roll's funner Cajun cousin.  King Cake supposedly came to New Orleans from France in the late 1800's.  Traditionally a teeny tiny baby doll is placed in the cake.  The person that finds the baby is deemed King for a day.  That's not without its cost though - the finder of the baby has to host the party the following year and provide the King Cake.  If you found the baby at a party last year and you're now searching for a King Cake recipe you've come to the right place.  So why Purple, Green, and Gold?  Purple is for justice, Green means faith, and Gold represents power - what every good King needs.

Where was the first Mardi Gras?

New Orleans, right?  WRONG!!!  My son is a junior at Spring Hill College (GO BADGERS) in Mobile, AL and he will happily tell you that Mobile had the first Mardi Gras celebration in the New World way back in 1703, just a year after the port city was founded.  New Orleans may claim the biggest party - but it will never be first.  Mardi Gras, which means “Fat Tuesday” in French, marks the beginning of the 40-day fasting season between Ash Wednesday and Easter. The revelry comes from the practice of celebrating the last night by eating rich, fatty foods before the ritual Lenten sacrifices and fasting begins. In other parts of the world it's known as Shrove Tuesday or Pancake Tuesday.

How do you make a King Cake?

This recipe may have a lot of steps to it, but it's really quite easy.  Except for the colored sugar and maybe the yeast, I bet you probably already have everything you need.  Make sure you use rapid rise yeast in this recipe - using active dry yeast won't work here.  In addition to the rapid rise yeast, you'll just need some staples.  All-purpose flour, sugar, salt, milk, butter and eggs.  For the filling you'll need more butter, cinnamon, and brown sugar - the icing is just powdered sugar, milk, and vanilla.  You'll need the colored sugars for sure because it's just nota King Cake without them - and a little baby if you want to be really traditional!  Let's start with the cake. 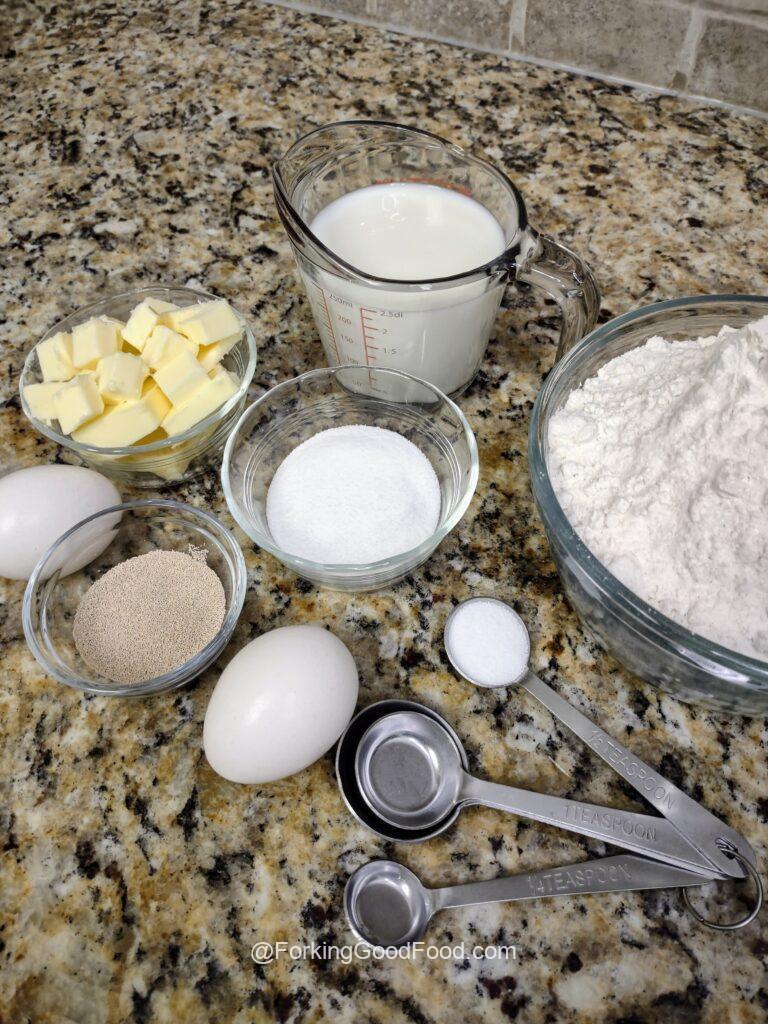 Save a cup of the flour for later and combine the remaining 2 cups with the yeast in a stand mixer using the paddle attachment for about 30 seconds. 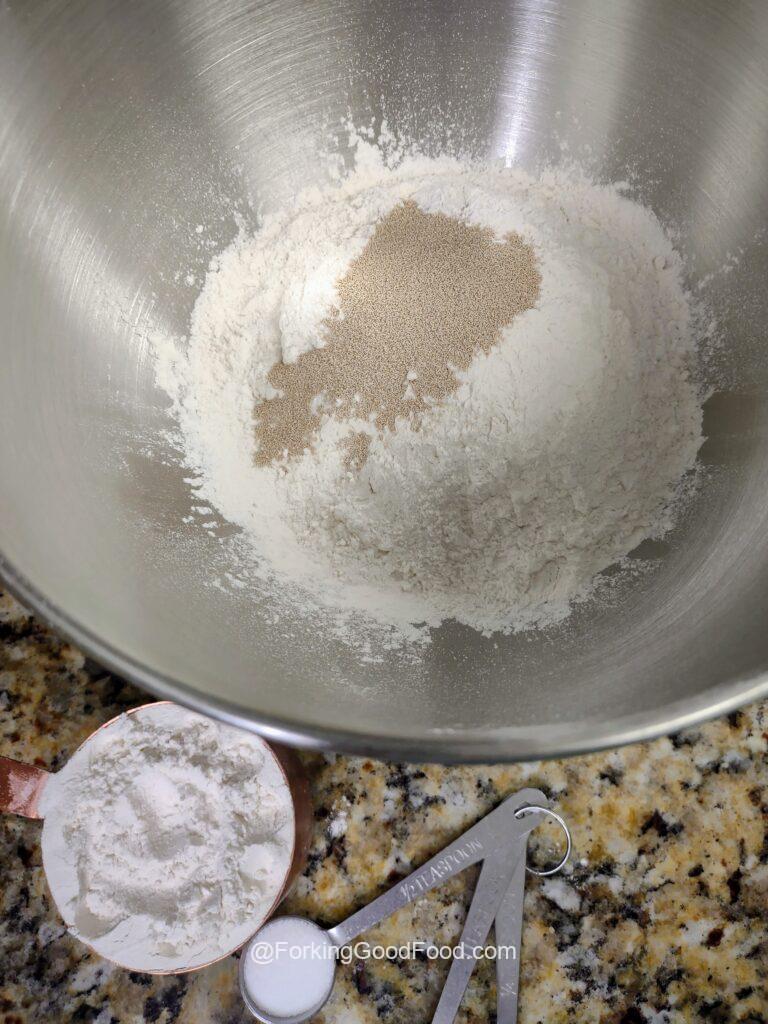 Then, in a small sauce pan, heat the milk, sugar, and salt until the sugar is completely dissolved.  You'll want the temp to be between 120 and 130 degrees.  With the mixer on low, slowly add the liquid to the flour/yeast mixture.

Scrape any dough off of the paddle attachment and pout on the dough hook.  Mix in the remaining flour until a nice elastic ball is formed that pulls away from the side of the bowl.  If it's too wet, add a little more flour.  If it's too dry, sprinkle with a little water.  Add in the soft (not melted) butter one or two pieces at a time until they are completely absorbed. "Knead" using the dough hook on low for about 8 minutes. Stop every few minutes to scrape the dough hook clean and scrape the sides of the bowl. 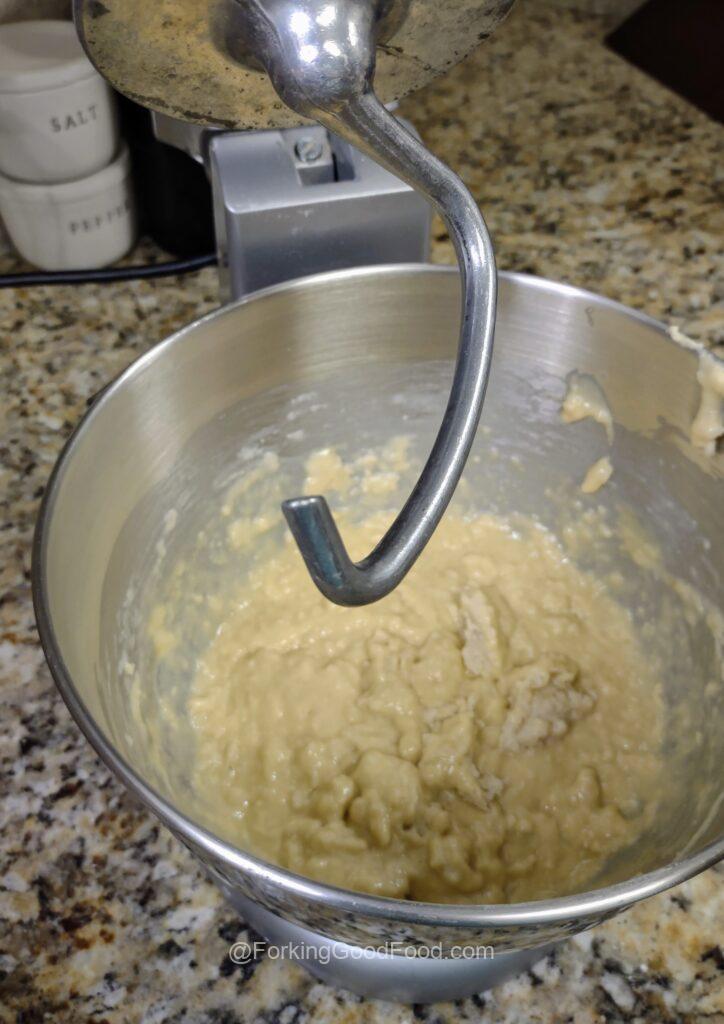 Turn the dough out onto a lightly floured surface and knead a few times to remove any air and to make sure it's smooth and elastic. 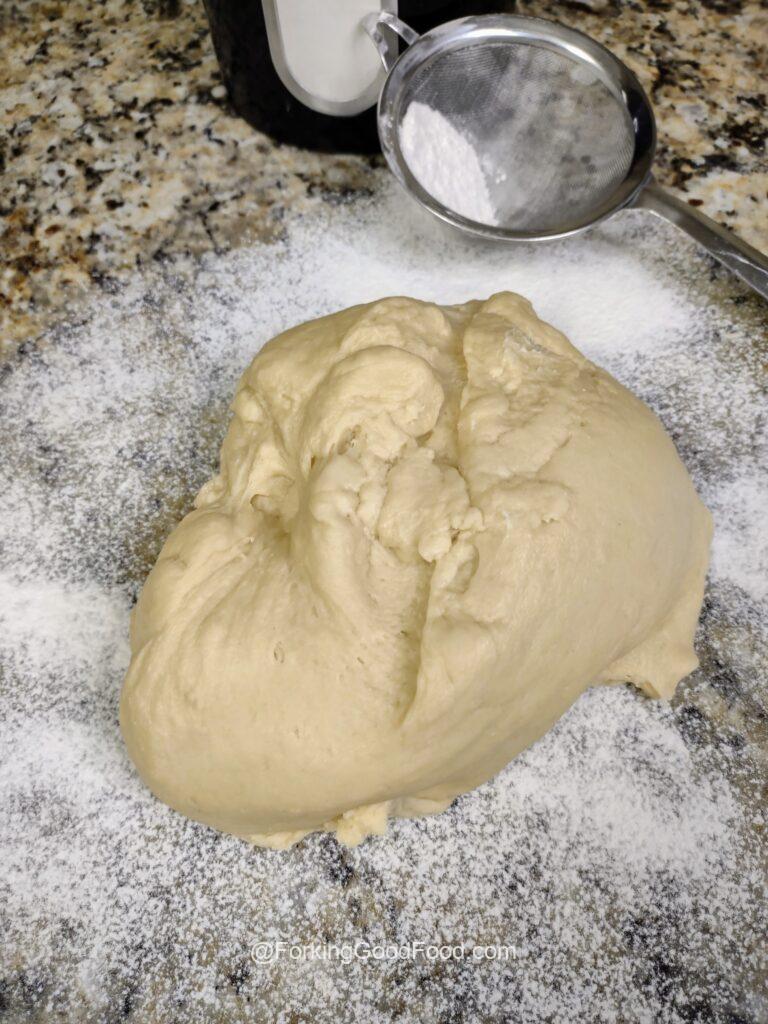 While the dough is rising, make your filling.  Toss the sugar, cinnamon, and soft butter in a bowl and mix it until it's nice and crumbly. 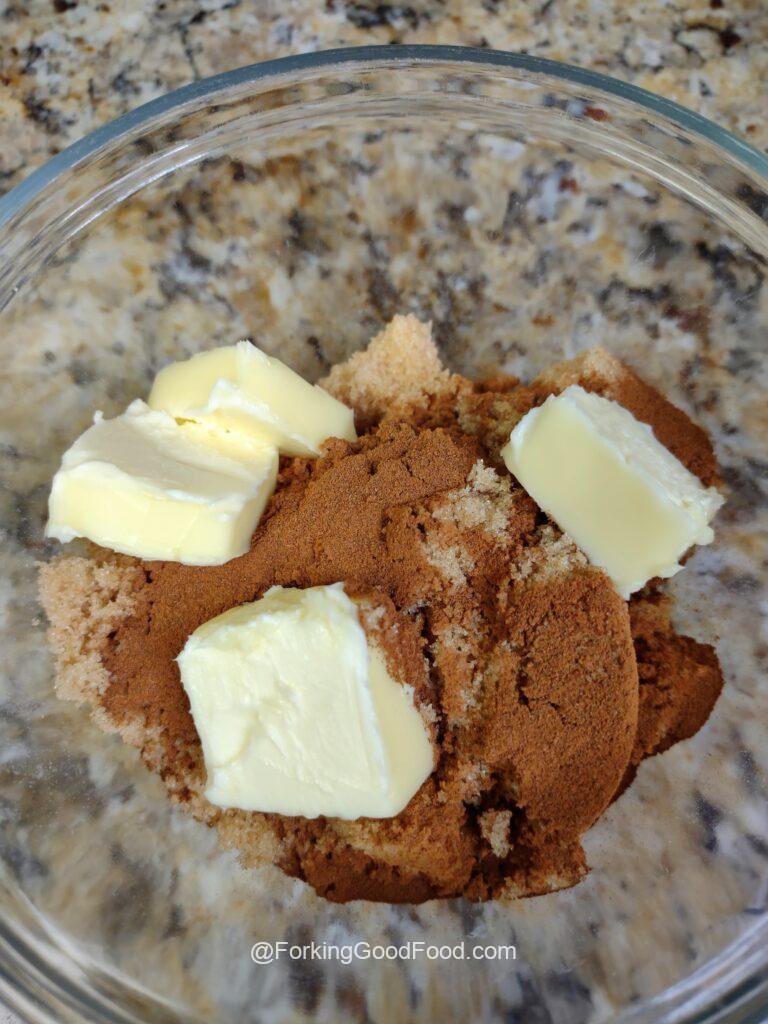 When the dough has doubled, lightly dust some flour on your work surface and roll the dough out to a 20X10 rectangle.  I'm horrible at rolling so I have to trim off any weird edges.  Sprinkle the filling over half the dough, along the long edge. 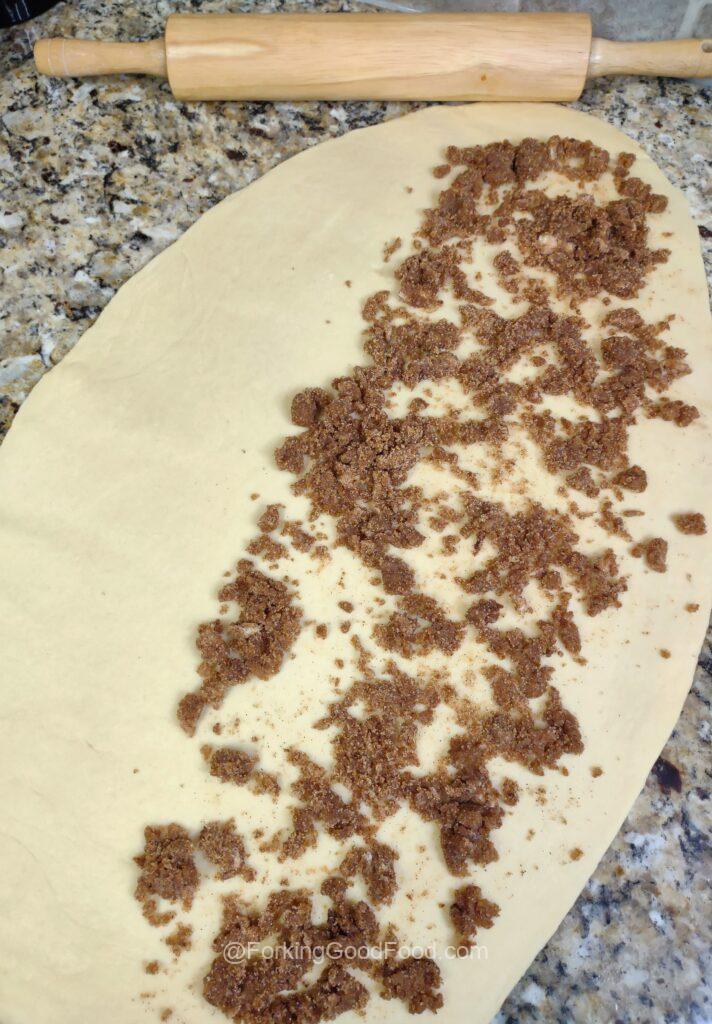 Fold the other half of the dough over the side with the cinnamon filling and press down a little so the dough sticks together. 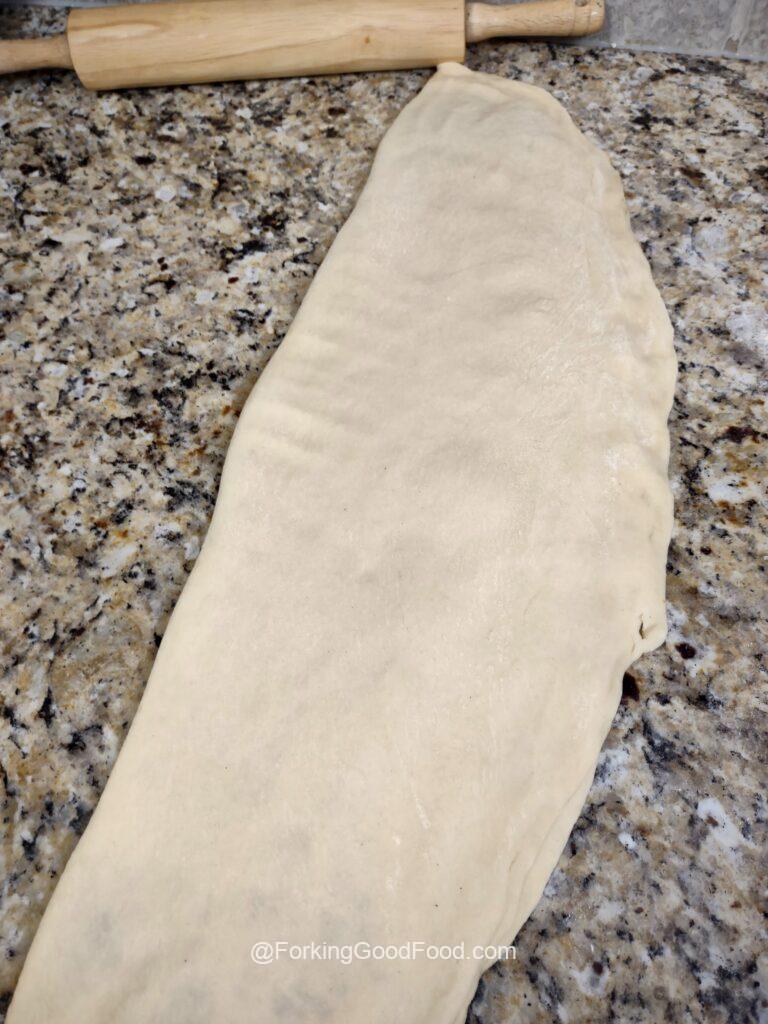 Like I said, trim off any weird edges, as shown above, and then cut the dough into three equal, long strips.  Using a pizza cutter makes this really easy. 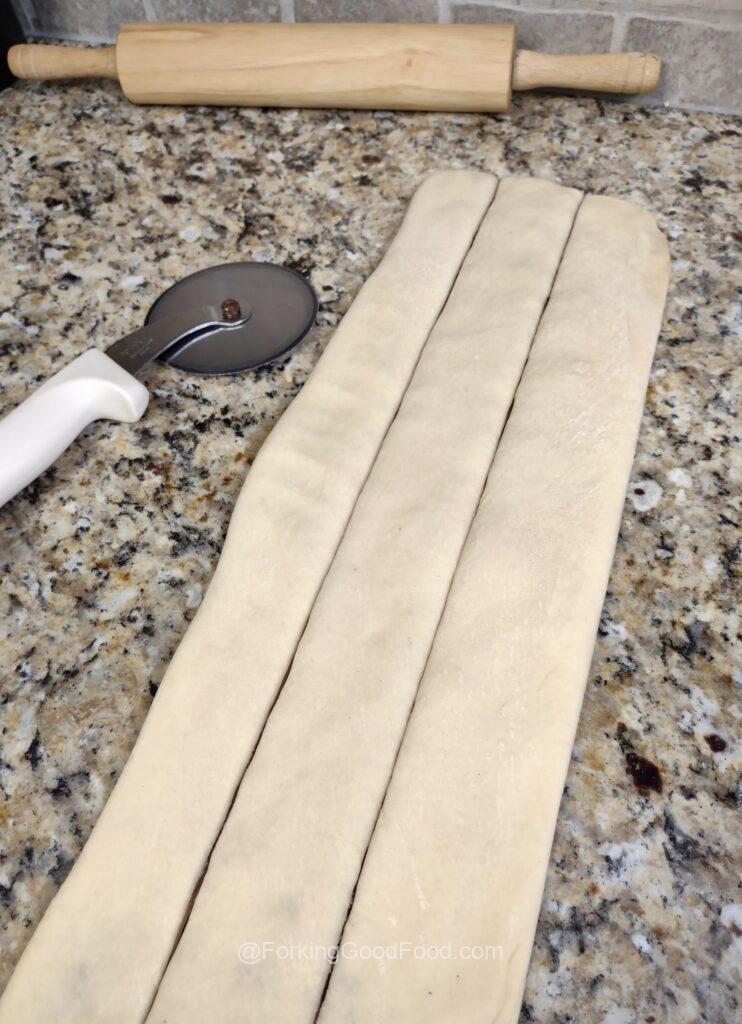 Pinch the three strips together at the top then braid them together.  If you need to know how to braid, check out YouTube because I will only confuse you. 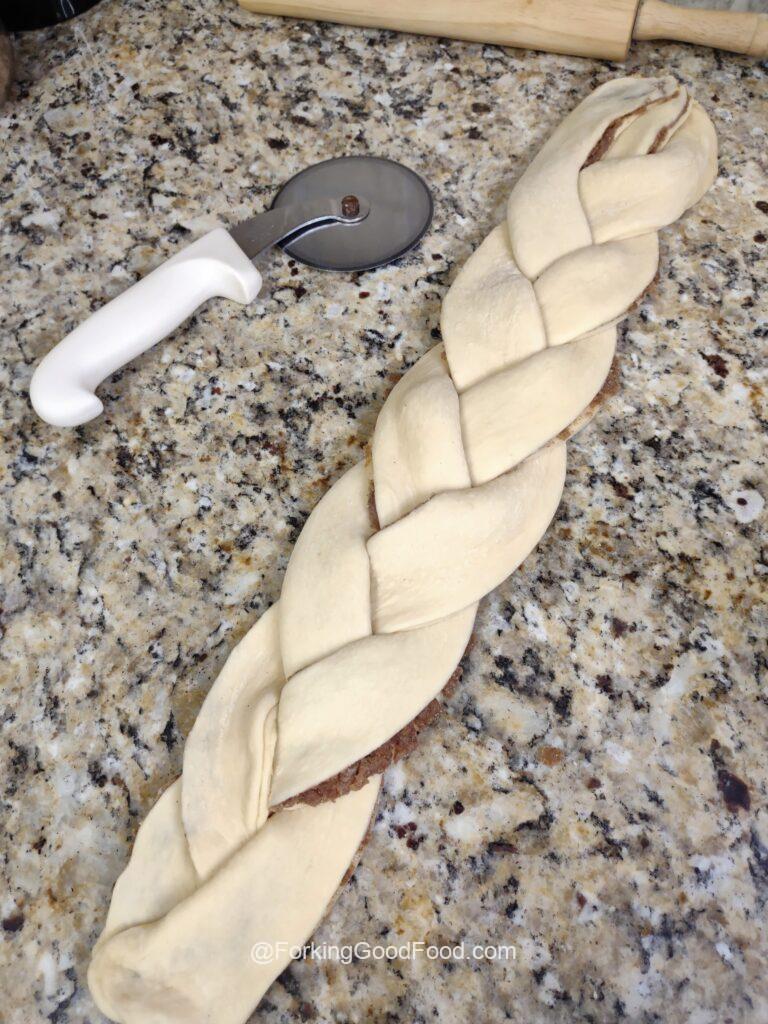 Gently stretch the braided dough until it's about 20 inches again, form a circle and pinch the two ends together.  Place it on a cookie sheet lined with parchment paper (or you can grease the sheet if you don't have parchment). 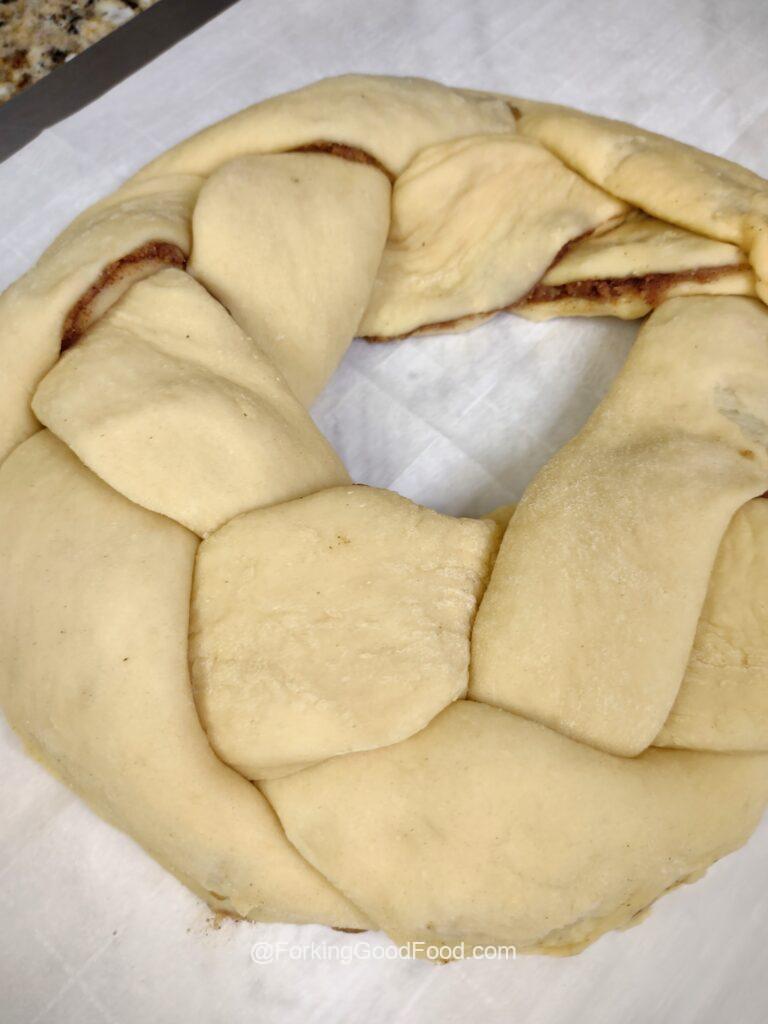 Cover with plastic wrap and let it rise for another hour at room temperature.  If you like, you can brush a little egg wash over the top just before baking to give it a nice golden color once baked. Pre-heat your oven to 350 and bake for about 30 minutes.   It should sound hollow when tapped.  Cool for about 15 minutes then transfer to your serving plate. 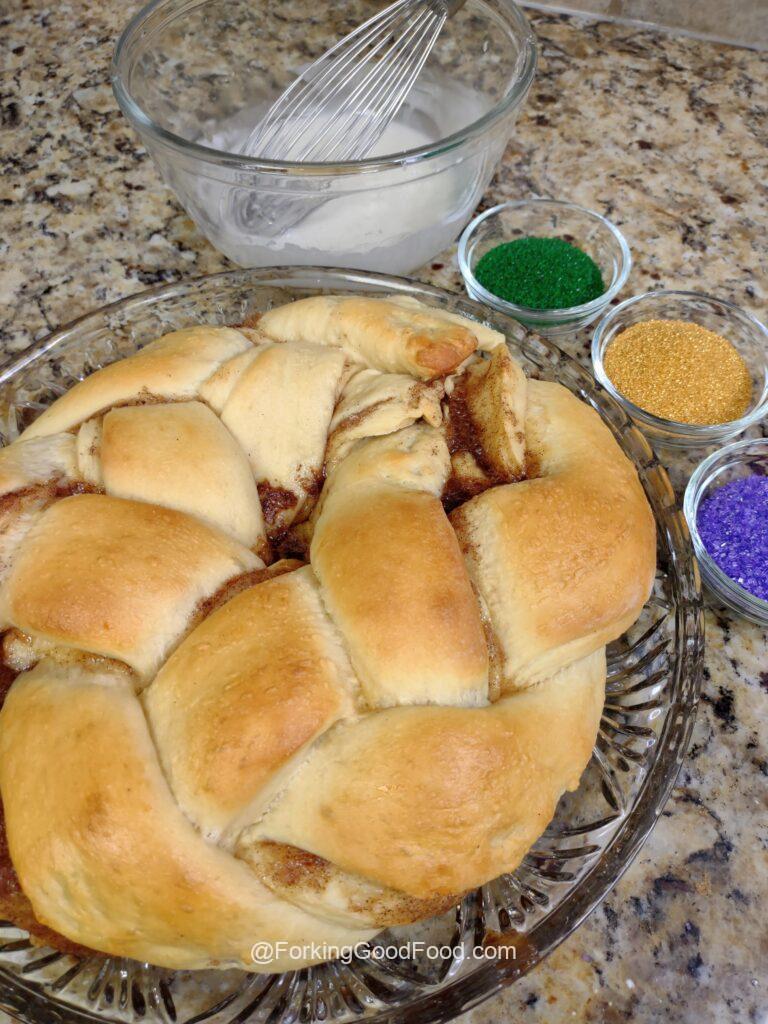 While the cake is cooling, make your icing.  You'll need powdered sugar, milk, and vanilla.  Whisk it all together - it's that simple. 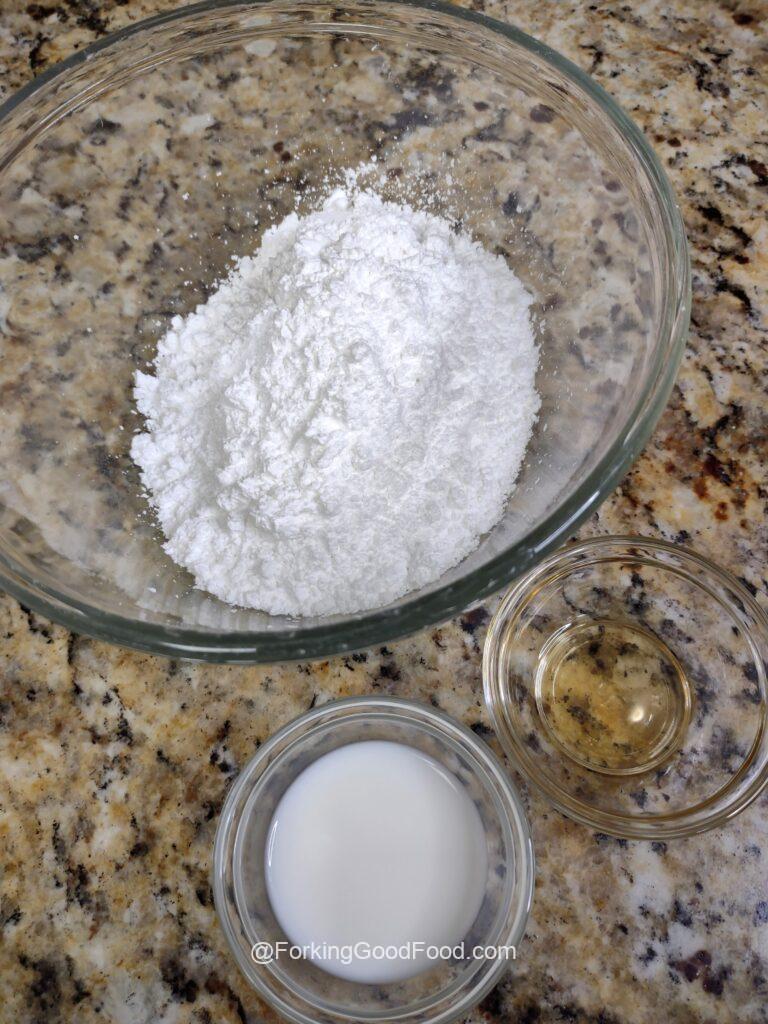 Spoon the icing over the warm cake and then immediately sprinkle with the colored sugar.  Traditionally it's striped, but have fun with it.  Kids love doing this part!! 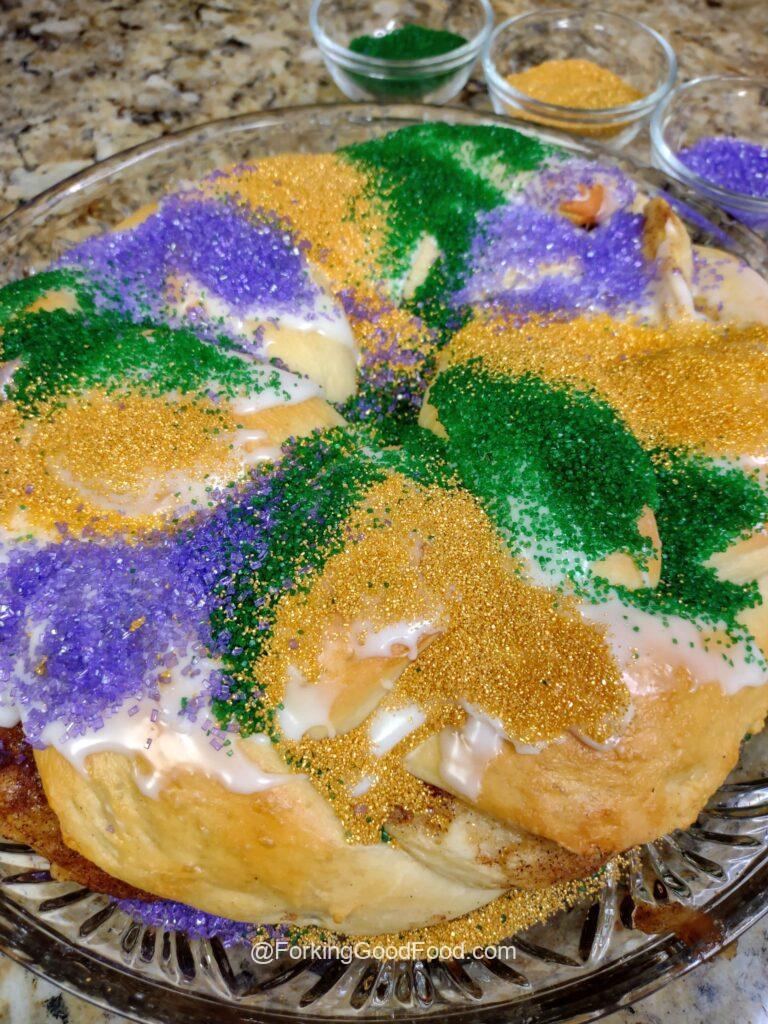 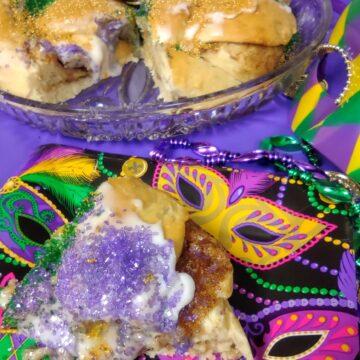 Do not use Active Dry yeast - the proofing times will be wrong.